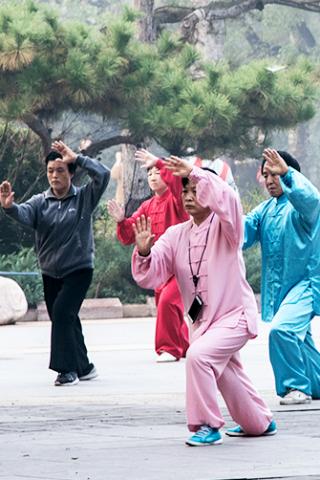 At the heart of Tai Chi Chuan is a series of co-ordinated and linked movements known as a form. The art is perhaps most famous for its forms. Almost all who see its movements synonymously associate them correctly with Tai Chi Chuan. They are as distinctive as they are unique, and few mistake them for being anything else. When a form is performed accurately, it radiates an image of perpetual motion within a circular frame. Practitioners are deeply engaged with their practice, unwavered by any distractions, and in this sense many that watch the movements of the art often describe them as a moving state of meditation. But whilst Tai Chi Chuan certainly does have its meditative aspects, the forms play a much greater role to the Tai Chi practitioner.

Forms are usually slow in nature; however, some schools will teach faster forms within their curriculum to more senior students. Beginners to the art often start by learning a slow empty-handed form so that a concise and methodical approach can be taken. Forms also vary in length from school to school. A short form will take around four to five minutes to complete, whereas a long form will take anything up to fifteen minutes. Whatever type of form you start to learn, it is this that becomes the backbone to your Tai Chi Chuan practice. The form contains within it flowing circular movements. Carrying them out with a relaxed body devoid of muscular tension not only allows the internal energy to be harnessed, but also gives Chi direction, so that it can flow naturally within the body. Forms, especially those of the empty-handed type,

provide the ideal skeleton from which large amounts of detailed information can hang. All Tai Chi Chuan forms are learned in fine detail. However, throughout every exacting movement that is learnt, there are underlying common principles and concepts that apply throughout. Tai Chi Chuan principles and concepts are fundamental for progress. It is only through them that you can grow and develop, and hence gain Tai Chi’s benefits. Conversely, learning movements without them gives you only a shell of the whole and will hence yield little return. The empty-handed forms create the perfect platform from which these common principles and concepts can be learned and applied.