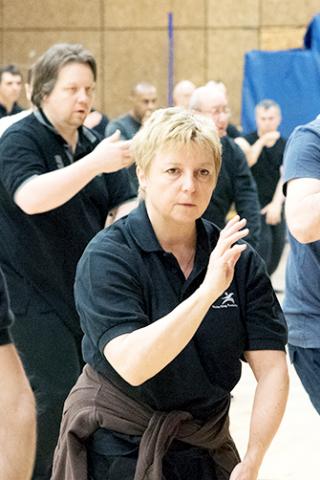 In all the different styles of Tai Chi Chuan, the form is used as a tool to help you slowly bring together the natural harmony of the mind, body and spirit. The word ‘natural’ is important, as it requires the re-education of our mind, body and spirit so that Chi can once again flow freely and naturally. This process necessitates time, effort, perseverance and patience to achieve the ultimate state of naturalness. The essence of all Tai Chi Chuan forms is to achieve this by developing the thirteen Tai Chi Chuan postures, which comprise the Ba Gua (or eight Trigrams), and the principles of Wu Hang (or Five Elements). Ba Gua is commonly referred to as the four sides and four corners of a square. The four sides are considered to be apparent and obvious within the form and consist of Peng (Ward Off), Lu (Roll Back), Ji (Press) and An (Push), whilst the four corners are unseen and disguised, and are composed of Cai (Pull down), Lie (Split), Zhou (Elbow) and Kao (Shoulder). The principles of Wu Hang embody the concepts of Jin (advancing), Tui (withdrawing), Gu (to be aware/attentive), Pan (gazing) and Ding (to be still).Most traditional forms are complex and long, requiring both a large space and the luxury of time to learn and practice. The John Ding Form (JDF) is a simplified 20-step empty-handed form based on Traditional Yang Style Tai Chi Chuan that embraces the essence of the art – the thirteen postures. It is also a form that is not only easy to learn but also requires less space to carry out. As such, it is ideal for the 15-Minute Tai Chi programme. JDF is put together for maximum holistic

benefit. It is also based on the results of Tai Chi Chuan research and on over 30 years of my own martial arts and Tai Chi Chuan teaching experience for health, energetic and martial applications. Embodying Tai Chi Chuan’s essence and holistic nature, this form is suitable for people of both sexes, young and old alike whether strong or weak. Even with a small amount of practice, you will find beneficial effects to your health. For those who want to pursue Tai Chi Chuan training further, JDF will provide practitioners with a good foundation and understanding to help them continue their training in the complete traditional system of Yang Style Tai Chi Chuan.