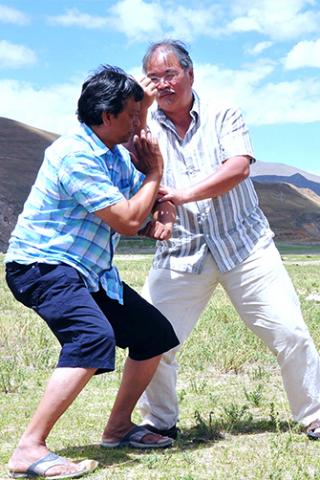 The term San Sau is used in many styles of traditional Chinese Kung Fu. The first word "San" means "mix" and the second "Sau" means "hands". Together, they refer to fighting techniques with hands that help the understanding and application of the martial aspects of Tai Chi Chuan. These techniques are a sequence of martial applications derived from normal shape and arranged in a predetermined choreography for two or more. Today, it is called "Dui Da" meaning whole fight. If two people are involved, it adds the word "two" and one says "Seung Yan Dui Da" and so on.

In the Yang style Tai Chi Chuan, there is a San Sau or Seung Yan Dui Da. Only a small number of schools in Tai Chi Chuan teaches the original period; recently, however, a number of schools have created their own San Sau. Traditionally, this exercise is taught only competent practitioners in the long form, push hands and your read. This is an important aspect of exercises to practice energy experiential partner practice such as push hands, Ta Lu or martial applications. San Sau is an advanced dynamic pre-arranged training drill of attack and counter attack moves. It is a fluid, rhythmical set of hands, legs and body movements performed between two practitioners who are in partnership with one another. It emphasises on the martial application of Chi based on the movements and postures drawn from the form incorporating the same principles and concepts as applied within the forms. It requires you to work in cooperation with another so as to refine and polish your skills further in internalising Tai Chi

Chuan principles for martial applications. San Sau is applied Tai Chi Chuan in which Tai Chi principles are ‘put into action’ - something that cannot be achieved by practising the forms alone.

This San Sau set demands interaction, co-operation and trust between the two practitioners. It also requires a willingness to concede part of yourself to your partner in order to gain its full benefits. Each practitioner is involved in constantly testing each other’s structure, stability and movements by applying pressure at various points in the techniques. By being pushed away by our partner heralds a weakness in our own posture and represents a flaw in the execution of the Tai Chi principles within that posture. We can therefore reflect upon the mistakes found by our partner, and correct them as necessary. Thus this drill practice is a process that encourages and reinforces the persistent precise practice of Tai Chi Chuan.

When learning San Sau, it is set out in two parts A & B. Ensure that you remember your part of the sequence and be clear about each move before moving on. Practice each move correctly and slowly with your partner regularly until it is automatic i.e. when you do not need to think of the next move. Once you are familiar with the whole sequence, you can practice these movements at a faster speed and with much more intent and force for real, to test each other structure and stability. For more experience people the practice can be done at a lower stance.

Through regular practice of San Sau, something quite extraordinary changes occur with your mind, body and spirit. Consistent correct practice allows the skin on the hands, arms and even all over the body to acquire sensitivity and receptivity to touch. With heightened senses you become more aware of yourself and others. You develop sensitivity to your partner’s forces and intentions during San Sau. Your reactions also speed up, as you rely less on sight and more on touch to anticipate your partner’s movements. You also slowly acquire the ability to project your Chi energy directly through your partner, using it to push them away on contact with no effort.

The Chinese believe that all these abilities and more are due to the development of energies (or jīng 精) brought about by different methods of applying Chi. By using these energies derived from chi application for combat, makes Tai Chi self-defence unique within the martial arts world. Integrating the various forms of energies or “jīng” creates a potent form of martial art that contains within it a powerful force that is also sensitive to the opponent. This is the realisation of traditional Tai Chi Chuan self-defence.